My friend and orchestra-mate Azeem Ward woke up the other day as famous guy.  It turned out that just about everyone who’s anyone in Great Britain is interested in attending his senior flute recital. And with good reason — his recital promises to be one of the best of the SoCal recital season!  Also, there will be cookies.  I told my mom to bring some extras.

Since Azeem has a handy-dandy Facebook invitation page, I already know what he’s likely to play even without an early-release program.  So without further ado, here’s the line-up:

François Devienne was born in 1859 to a saddlemaker in Joinville, Haute-Marne, in the north-east of France. As the last of fourteen children, Devienne was likely free to choose a career path. A stint in the church choir led this tireless man into a path that led ultimately to the founding of the Conservatoire de Paris.  He died at the age of 44, perhaps as some say, from overwork.   In his short life, he wrote instructional materials as well as hundreds of works for flute and other instruments. 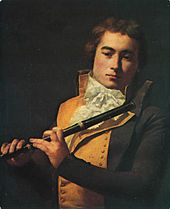 If you haven’t heard François Devienne’s Concerto No. 7 in E Minor, you are missing out on a wonderful piece. It’s a frolicking tune that will leave you feeling more cheerful than you’ve felt for a while. You will whistle it in the car after hearing it once, the themes of the first movement are that catchy. But don’t let first impressions sway.

The sweet and melodic Allegro leads into  a gentle and almost tender Adaggio that gradually increases complexity, rounding into a sea of romantic lyricism that takes your breath away. But Azeem will still have breath left, and you will be left wondering what the rest of the concert holds!

Maybe there will be a cadenza, I hope so. We’ll have to wait and see!

Philippe Gaubert was born 20 years after François Devienne, and lived well into the middle of the 20th century.  This celebrated artiste was Principal Conductor at the Paris Opéra, a composer, and Professor of Flute at the Paris Conservatory.  While individually not the most inventive of composers, his work draws from and reflects the rich and fully developed musical tapestry originating toward the end of the late romantic period. Gaubert’s Sonata No. 3 was composed in 1933.

The Allegretto opens the sonata with a peaceful and relaxed exposition. There is only the slightest hint of the complexity we will soon enough encounter.  This soothing movement ends on an optimistic high note.

The sonata’s second movement begins nicely enough, as well. It is an Intermède  Pastoral, sweet dinner music Très modéré , however it soon takes a turn into a slightly more haunting style. It’s a winding piece layered with infinite patience. It asks us to believe that there are answers out there, answers to the big questions about creation, meaning, purpose.

Although we follow each nuanced ribbon, each tangential thematic idea, we are eventually left with even more questions about the nature of being than we started off with. In this sense, the sonata has a much more introspective appeal than most you will hear, because what you bring to the piece is a large part of what you will receive from it.

In this spirit, the final movement,  styled as  Joyeux Allegretto, reaches out to us. Why must there be answers?  Why not just celebrate the day, the sunshine, the grasses, the rain, the night?  And celebrate it does. But for those of us paying close attention, there is the slightest element of doubt, because, hey, complexity is fashionable.

David Roitstein, unlike most composers, is alive and kicking, and actually working. He is currently the Jazz Program Director at CalArts (California Institute of the Arts) in Valencia, California. A pet project of his is The CalArts Jazz CD Project, a professionally produced collection of student works created at Capitol Studios. Yes. In Hollywood. So wow! Roitstein’s Flautas are spicy, fresh, and warm. A perfect complement to the beautiful Santa Barbara sunshine.  In fact the piece should really be about sunshine. Those flutes just push and peek through the clouds, then they slither in dancing on their tango toes. When 100,000+ people want to attend your recital, there is temptation to move the party to a larger venue. But that would be a crime against Flautas! However big the sound, the piece feels genuinely intimate to me for some reason.  I can hardly wait to hear what sort of interpretation Team Felber comes up with. For those of you not in-the-know, Jill Felber is the Professor of Flute at UCSB, and she’s currently coaching the mega-star known as Azeem Ward.

There are very few reasons to live in New York City.  Just about every bi-coastal I know is going mono-by-the-beach because they’ve finally figured out that it doesn’t snow in coastal SoCal.  But if there were just one tiny reason to stay in NYC, that might just be Greg Pattillo.

Every artist has a tagline on their website — a select snippet from a major publication which is lauding them, hailing them, celebrating them — you get the idea.  Greg Pattillo’s line is lauded by The New York Times as “the best person in the world at what he does.” I know, right? Has the New York Times not heard of Azeem Ward? Seriously though, if you ask Azeem, and I’m not speaking for him here, but he just might agree with the New York Times.  Pattillo is good.  He’s introduced a sub-genre where no sub-genre has gone before.

When I was little (ok, I know I’ll never be more than 4’9½”) I slept with my violin. It was part of me then, and part of me now.  I can only think that Pattillo has that same relationship with his flute. He slept with it, breathed with it, and the sounds of his life were etched into it. He explodes with that sound, not flute music, but with life.

Three Beats for a Beat Box Flute is amazing beyond belief.

Azeem hints that he will premiere original works!!

I’ve hear some of his original works, and I know there is no way to prepare. Azeem also mentions that he doesn’t play in a void. Here are some fellow musicians who we can hope to see in his senior recital:

Click here to donate to the UCSB Music Affiliates by Mail

Until earlier this year, my sole experience with turn of the century British feminist history was a footnote in my high school AP European History book. So when asked about Emmeline Pankhurst on the AP exam, I would have been out of luck were it not for the Sherman Brothers’ “Sister Suffragette” lyrics that I’d remembered from the movie-musical, Mary Poppins.

“Sister Suffragette” is a high-energy, shower-worthy tune, with lines like, “Our daughters’ daughters will adore us, and they’ll sing in grateful chorus, well done, Sister Suffragette!” Down in the less catchy zone of the lyrics is the phrase, “Mrs. Pankhurst has been clapped in irons again”, a reference to one of the leaders of the British Suffragette movement. So I aced that question on the AP exam. Fortunately, I wasn’t asked to name the real anthem of the suffragette movement, as Mary Poppins offers no help there.

That honor belongs to “The March of the Women”, written by composer, Ethel Smyth, with lyrics by Cicely Hamilton. Smyth dedicated her song to the Women’s Social and Political Union, and with help from Emmeline Pankhurst, it was adopted as the group’s official anthem. Ethel Smyth was a rarity – she was not just one of the earliest female composers, but one who’s work is inspired and infused with a feminist agenda.

I will be playing Smyth’s Double Concerto for  Violin and Horn in the not-to-distant future.  I haven’t been able to find much about it, so I have written some program notes just for myself.

About the Double Concerto:

Dame Ethel Smyth’s Double Concerto for Horn, Violin and Orchestra/Piano is a challenging piece by any measure.  It runs close to a half an hour, and is joyous, somber, and even frilly in some places.

The double concerto opens sweetly with a wistful, aspiring theme that says, “Here you have it!”  as if we are to undertake a challenging task that will involve many different approaches. We are fresh to do our work, we will rise to the challenge.  Small successes are greatly celebrated, while a brief failure or two are swiftly and softly mourned before the task is again undertaken.  In some ways, we feel as if we are solving a five thousand piece puzzle. Much examination of each piece, pairing by color, sorting by shape, and grouping smaller sets into larger, we begin to recognize a forest, then a granite-faced cliff, and a small town town emerges in the background. As the puzzle comes together, we creep into the landscape ourselves and try to peep around a corner.  But we realize that it is all an illusion.

Smyth’s elegy is quite restrained.  I wish I could have stepped inside her mind to understand what she was trying to describe. It’s not a dirge or a funeral march, its a gentle lament.  If it weren’t for the dynamics, I fear the piece would be a washout.  But with the right dynamics, it does feel like a rainy day with thunder in the distance. I can just hear pages of yesterday’s newspaper fluttering almost inaudibly, blown against a screen door that is no longer slamming now that the wind has died down. I wonder if Dame Ethel was too optimistic and happy to write a properly morose elegy, I’ve certainly heard much more depressing music than she seems able to muster.

There is pageantry of dervish proportion in this runaway march-flavored finale. What surprises me is that the movement has a sort of Disney feel to it for most of its approximately ten minutes of playing time. The horn and violin separate a little more in this movement, as if their individual stories have somewhat independent outcomes. The horn urges the violin to follow, and they do play together for a while before diverging. The violin returns to seek safety in the sand while the horn sets sail for the big wide world.  It’s an altogether a fitting finale for such a wonderfully virtuosic pairing of instruments.